Chiller Sound was founded in 2001 by Jon Altschiller. Known for his attention to detail and extensive mixing credits, Jon packed up his studio in the heart of Manhattan and moved it to Pound Ridge, New York, at the height of the pandemic. We spoke with him and Westlake Pro’s Matt Knobel about building his new space and designing to support both Dolby Atmos and Sony 360 Reality Audio in the same control room. The result is a studio on the cutting edge of technology that retains the classic recording studio vibe.

Built on a nine-acre piece of land, Chiller Sound is an artists’ retreat in every sense of the word. With a control room that can open into the live recording space, clients can tap into the unique atmosphere and unparalleled flexibility of the studio that Altschiller and Knobel designed.

“Acoustic spaces can look many different ways,  and what we wanted to do was reminiscent of the historic NYC studios that we grew up in, but the difference here is you have so much room,” says Knobel.  “We also wanted you to be able to record in every area of the studio. The compound is thoroughly Dante-equipped – even the tennis court. You can record anywhere on the property”.

Altschiller elaborates,  “I have a 300 foot Ethernet cable and have done recordings outside in the woods using the Focusrite RedNet X2P. I can literally plug in a microphone anywhere on the property and hit record. It’s amazing. Here you can spread your wings, literally. It’s an amazing retreat.”

Dolby Atmos and Sony 360 RA really are two separate experiences, but what Matt Knobel did was brilliant, and I know other studios are adopting it now.

Equipped with an Avid MTRX Studio for Dante to and from Pro Tools and his outboard gear (a healthy collection of Tube-Tech, Neve, and Universal Audio among others), Altschiller has all the I/O he needs.  A Grace M906 and Genelec immersive sound speaker array round out his control room giving him a crystal clear monitoring solution, not to mention pulling double duty as his Dolby Atmos and Sony 360 Reality Audio setup. He does separate mixes for both immersive formats with his new workflow.  “What Matt and I devised in this room was that I would take the listening spot I listen to every day in Atmos and turn my seat around to face the back wall for my Sony 360 Reality Audio mixing.” He can have both mixes going out of his system simultaneously. And with Dante, switching between the platforms is a piece of cake. “I can go between the 360 Reality Audio and an Atmos session in the snap of a finger. It’s really awesome.”

Knobel and Westlake Pro worked with Altschiller to create a flexible and future-proof solution to allow for recording and mixing in multiple Immersive formats “It was a pleasure,” says Altschiller. “I definitely took the blue pill or whatever it was because I’m deep in the Matrix. I love it.” 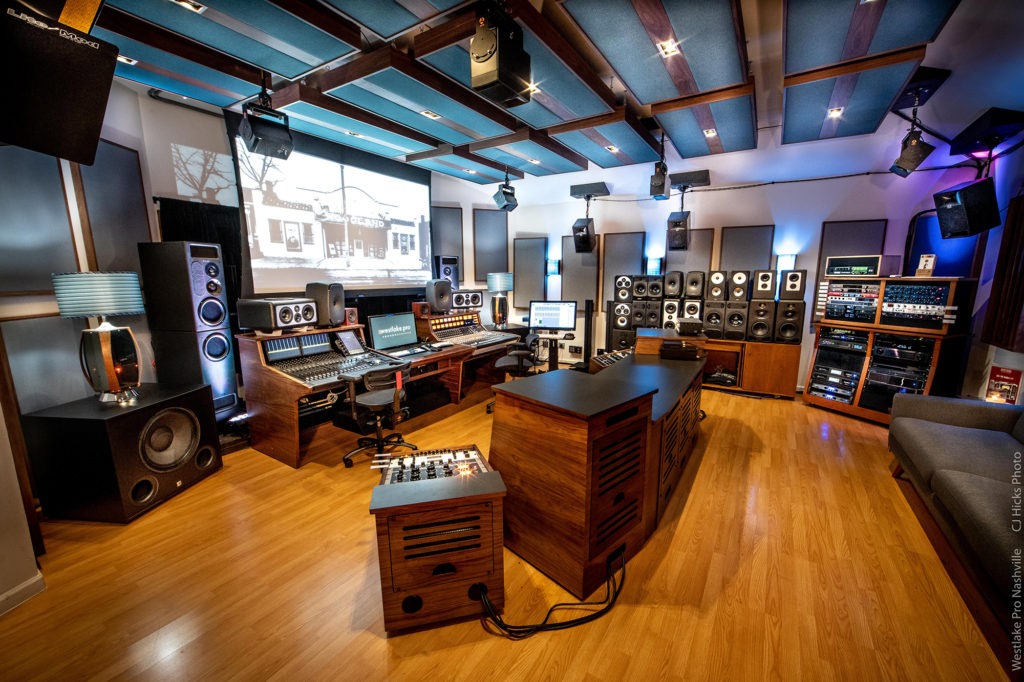